Receive year round fresh inspiration and helpful tips by following our social channels.

Bryan continues to forge new records with his television shows and most of all, expert renovation projects. HGTV Canada’s Island of Bryan is renewed for a second season and fans can’t wait to see the final reveal of the Baeumler’s  South Andros project where Bryan and his wife Sarah have undertaken the task of renovating a deserted resort. With the resort already set to open this November, Bryan shared some of his island renovation experiences ahead of his arrival at this year’s Edmonton Fall Home Show. 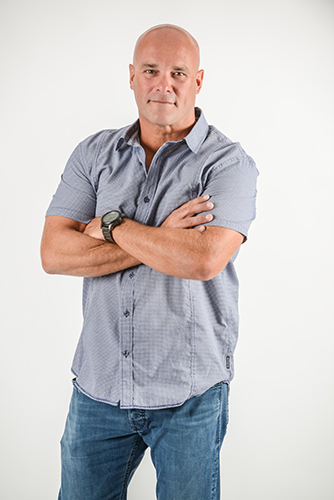 When it comes to comparing climate, it’s quite obvious. The island is home to beautiful sand beaches and warm weather year round. In Canada, it can snow, rain and end in sun in just one day! “The basics in renovation are the same,” says Bryan, when thinking about the differences in tackling projects outside of Canada’s climate. “The Bahamian Building code is actually based on Canada’s codes so there’s familiarity there… just without the consideration for frost and cold temperatures obviously.” Materials used are also different: “At home we use a lot of lumber and drywall, but on the island, you use more masonry and concrete based product because of the high humidity and cost,” says Bryan. “So that has been a learning curve for sure.”

The more nerve-wracking part of starting the project? Finding local labour on such a small island. “The island’s population is only about 700 people in total, so we were nervous about finding enough local labour to tackle something like this,” notes Bryan. “But we were pleasantly surprised to find a ton of skills, hardworking locals that have come onboard to help us get this hotel back up and operating.” For Bryan though, there is a lot of similarity to renovating a hotel to a home. “It really is a much larger project than building a single house,” says Bryan. “We have 22 villas and 18 hotel rooms. But it really is just a residential renovation on a much larger scale… with a few additional considerations for commercial hotel accessibility and fire regulations.”

People are eager to see the upcoming season and the resort open and running. The adventure continues for the Baeumler’s who are busy filming and putting the finishing touches on the resort. Bryan will be sharing his tales from the island on the HGTV Canada Main Stage this year at the 2019 Edmonton Fall Home Show. You can catch him Friday at 6pm or Saturday at 1pm. Find your tickets at www.edmontonfallhomeshow.com

Get a Booth Quote

Make a year's worth of sales in one weekend.